Restoration of the tower 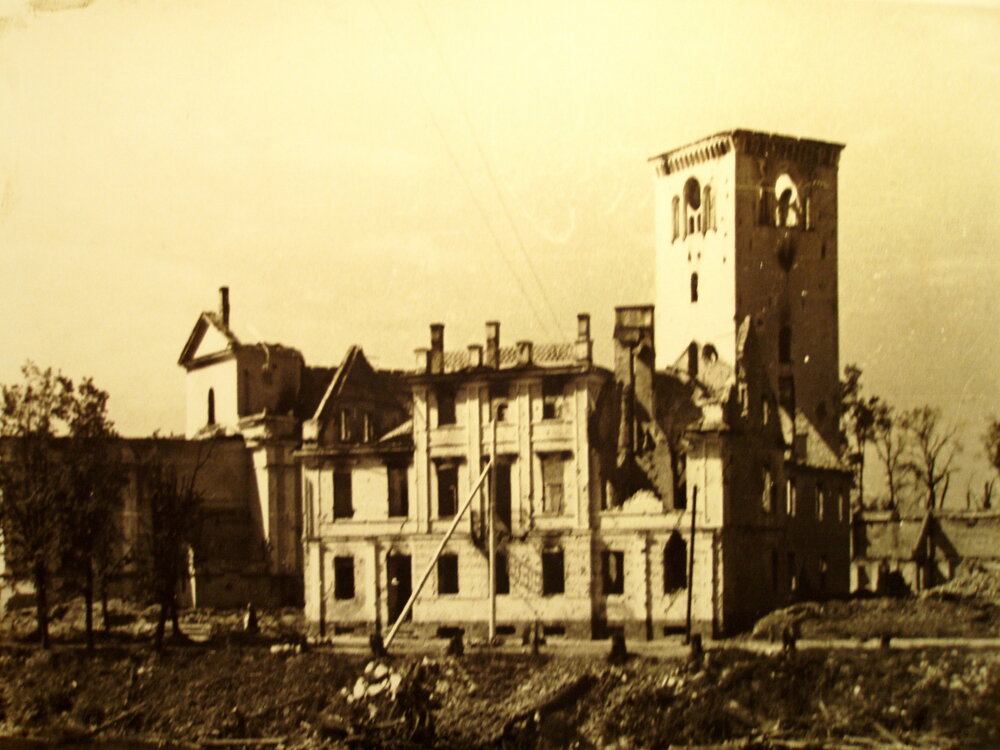 prev
next
View the embedded image gallery online at:
https://www.visit.jelgava.lv/en/holy-trinity-tower/restoration-of-the-tower#sigProIdbf1991de40

Restoration of the tower

Tower of Jelgava St. Trinity Church is the oldest preserved building in Jelgava with a history spanning more than 400 years. At the end of July 1944, when battles for Jelgava took place, the church was burnt. Only the external walls and the tower remained, but the church could still be renovated. However, in 1954 a decision was made to demolish the walls of the church by detonation and to leave only the tower which became the point of geological survey and cartography triangulation.

Attempts to attract funds for renovation of the tower

When Latvia regained independence, the tower of Jelgava St. Trinity Church became a particular symbol of independence. Charity campaigns with concerts ‘Us for the Tower” were organised, and the revenue from the campaigns was donated for the purposes of continued renovation of the tower; however, the funds were still lacking. In 1994/1995, the construction company SIA Atvars developed a tower renovation design intending to renovate the tower steeple to the height of 72 metres. Even though this project was not implemented, it marked a crucial point in the process of restoration of the tower of St Trinity Church because further actions by the Jelgava town were based on this first serious project to restore the tower.

Installation of the pyramid roof

As of 2001, the local government began active development of attraction projects of the EU funds. In order to create a stable foundation for the future roof, at the turn of 2003-2004 the company “PVZ konstrukcija” in accordance with a design by SIA “Arhitektoniskās izpētes grupa” (“AIG”) structurally secured the top edge and luxurious cornice at the height of 36.5 metres. At this time, SIA “AIG” and architect Artūrs Lapiņš were invited for further development of the renovation project of the tower roof. The design developed by him envisaged creation of ten usable floors inside the tower and covering of the tower with a low tetrahedron pyramid roof. It would be made of metal structures and covered by glass, offering the view of the town scenery from the viewing platform. On 18 November 2004, the installation of the roof structures of the tower was already finished, as well as the glass covering was placed. In the spring of the next year, a lightning conductor steeple with a brass sphere was placed at the top of the pyramid of the tower, at the height of 46.5 metres. Within the sphere were placed documents related to the history of the tower, a message for the future generations and a set of coins.

Complete reconstruction of the tower

In 2008, Jelgava local government submitted an application to the European Regional Development Fund (ERDF) with the project “Development of Regional Scale Tourism and Cultural and Educational Centre in Jelgava” which gained support from the experts and the EU funding for complete reconstruction of the tower. The project had to be implemented from 23 March 2009 until 30 December 2010. Renovation project of the tower was implemented by SIA “Rimts” according with the design of architect Lapiņš by involving in renovation of the tower also specialists experienced in geological and archaeological research. Interior and exterior renovation of the tower was performed during the project, as well as creation of premises for the Tourism Information Centre, historic exhibitions, restaurant, exhibition hall and viewing platform.

Architectural and artistic examination of the tower

During architectural and artistic examination of the tower of Jelgava St. Trinity Church performed in the summer of 2009 by architects of SIA “AIG” it was found that regardless of the losses of original structures of the church, the church tower contains a significant information on construction methods and architecture of the church buildings of the Renaissance period in Latvia. Decorative masonry of the frieze of the façades of Jelgava St. Trinity Church with its finishing is unique. Church façades were decorated with an ornamental masonry of bricks, the fragments of which may be viewed in the courtyard of the Tower (North side). Miniature bricks were laid in vertical ‘spikes’, and the walls of the South side were decorated with bricks laid in an ornament resembling ‘coffee beans’. A similar solution of façades in Latvia has been retained only in Riga, St. John’s Church.

Archaeological excavations during the renovation

At the same time, researchers Mārtiņš Lūsēns and Guntis Gerhards performed archaeological excavations inside the former Jelgava St. Trinity Church, uncovering several dozens of 18th century burial sites and obtaining anthropological material which is an important source of information on the quality of life for the 18th century inhabitants of Jelgava and Kurzeme, Zemgale Duchy. More than 900 various coins have been found in the burial sites located in the territory of the Trinity Church, and the obtained numismatic collection is the largest aggregate of coins located in one archaeological monument in the territory of the former Kurzeme, Zemgale Duchy. The collection of excavated antiquities has been transferred for the storage to Ģ. Eliass Jelgava History and Art Museum, and a part of the collection can be viewed in the exhibition on the 4th floor of the tower of St. Trinity Church.

Tower elements – the renewed clock and the fountain

In December 2009, the company SIA “Laika Stils” installed unique clock faces on all four sides of the tower façade, thus renovating the tower clock of St. Trinity Church and placing it in the round window openings of the top floor of the tower. Clock faces made from matted glass and lit from within each spans 2.26 metres in diameter and weighs almost 300 kilograms; therefore, installation of the clock faces in their proper place in the façade was a complicated task. The figures that are well visible from the ground are 32.5 centimetres long; moreover, according to the legends of Jelgava, number one placed in the clock face on the Lielā street façade of the tower is plated in gold. The clock is equipped with an hour chime and programmed melody replay system. Usually the clock chimes five times a day (at 9:00, 12:00, 15:00, 18:00, 21:00), but on holidays – thirteen times, in full hours from 9.00 to 21.00. The tower clock plays 43 various melodies, mostly Latvian folk songs.

In accordance with the design developed by Lapiņš, an environmental design object titled ‘Trinity’ had to be placed in the middle of the former church. Already in 2009, Jelgava Council organised an open tender on implementation of this idea. The main award and the right to implement the idea was received by sculptor Jānis Aivars Karlovs. His work of art – a three-piece sculpture carved in granite – reflects the core of the highest values of the Christian faith: unity of God the Father, God the Son, and God the Holy Spirit.

Opening of the renovated tower

The tower of Jelgava St. Trinity Church has been renovated during the ERDF project “Development of Regional Scale Tourism and Cultural and Educational Centre in Jelgava”. For restoration and renewal works within the framework of the project were used 1.53 million Latvian lats: ERDF granted almost 910 thousand lats, and 48 thousand lats were received from the state budget, and Jelgava Council has invested 570 thousand lats.

More in this category: « Open hours, prices, contacts Lease of premises »
back to top