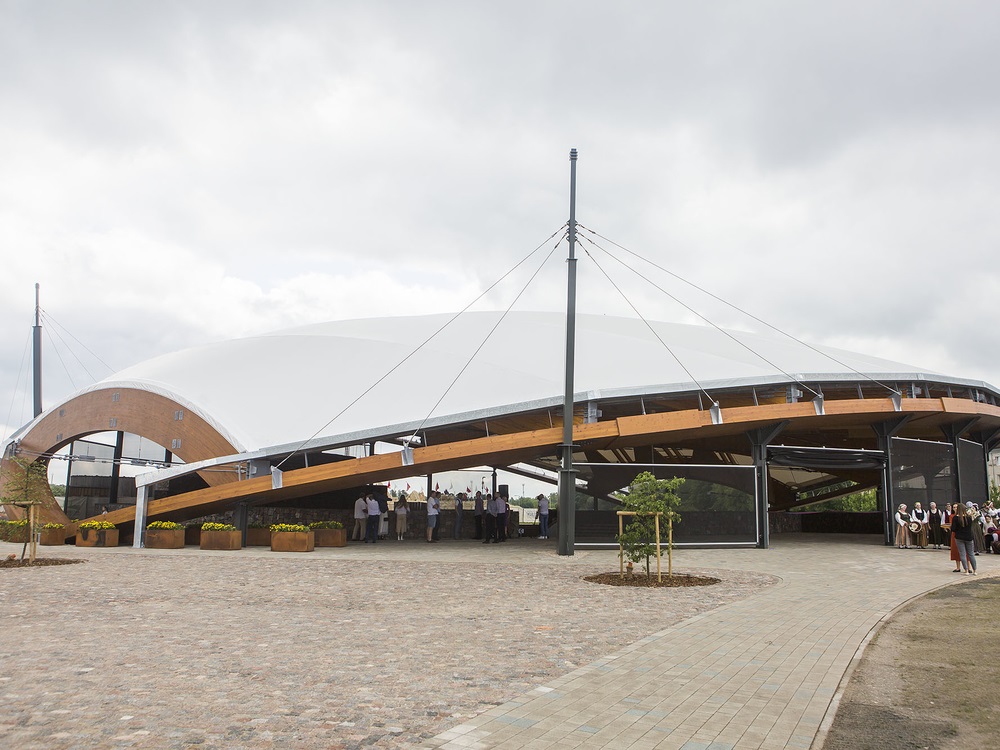 prev
next
View the embedded image gallery online at:
https://www.visit.jelgava.lv/en/sightseeing/cultural-objects/item/4863-brivdabas-koncertzale-mitava#sigProId4568db844d

In 2014, in the territory of Pasta Island, within the framework of the ERAF project "Improvement of Pasta Island and creation of rivers as a tourism and active recreation product in Jelgava", an open-air stage (today the Open Air Concert Hall Mītava) was built in the form of an amphitheater with stage, parterre and grandstands.

Walls of 250 gabions have been created around the stage, in which approximately 2,000 tons of Latvian boulders have been used. Behind the stage there are changing rooms, next to which there are two exhibition, trade and event areas covered with clinker bricks and granite pavement. The stage is complemented by a roof, which improves the acoustics and prolongs the event season. The roof visually resembles a shell, it has a unique large-sized bent glued wood construction. The longest total span in this structure is 60 meters, but in total about 530 cubic meters of wood are used in the construction of the stage roof. It is the only roof of its kind in the Baltics, and the only one in the world in this solution and performance. During the event, the roof is able to protect 700 spectators in the seats and 500 spectators on the ground floor from the sun's rays and adverse weather conditions.

On September 13, 2019, the opening concert of the Concert Hall took place. Continuing the unified concept of the unique pedestrian bridge in the Baltics, which connects the city center with Pasta Island, the stage has been given the name Open Air Concert Hall Mītava.

In 2019, the Open Air Concert Hall "Mītava" was awarded the 1st place in the Latvian Construction of the Year award in the nomination "Wooden building", as well as the 1st place in the construction competition The Best Building of the Year in Latvia in 2019 in the nomination "Wooden building". In turn, in 2021, the Concert Hall received the Latvian Events Forum Excellence Award 2020 in two nominations - "The Most Outstanding Event of 2020 in Zemgale" and "The Most Outstanding Event Venue of 2020".

During the events, the entrance to the concert hall is only with the purchased entrance tickets, but at other times the Open Air Concert Hall is freely available for viewing.

back to top
Jelgava, Pasta sala 3