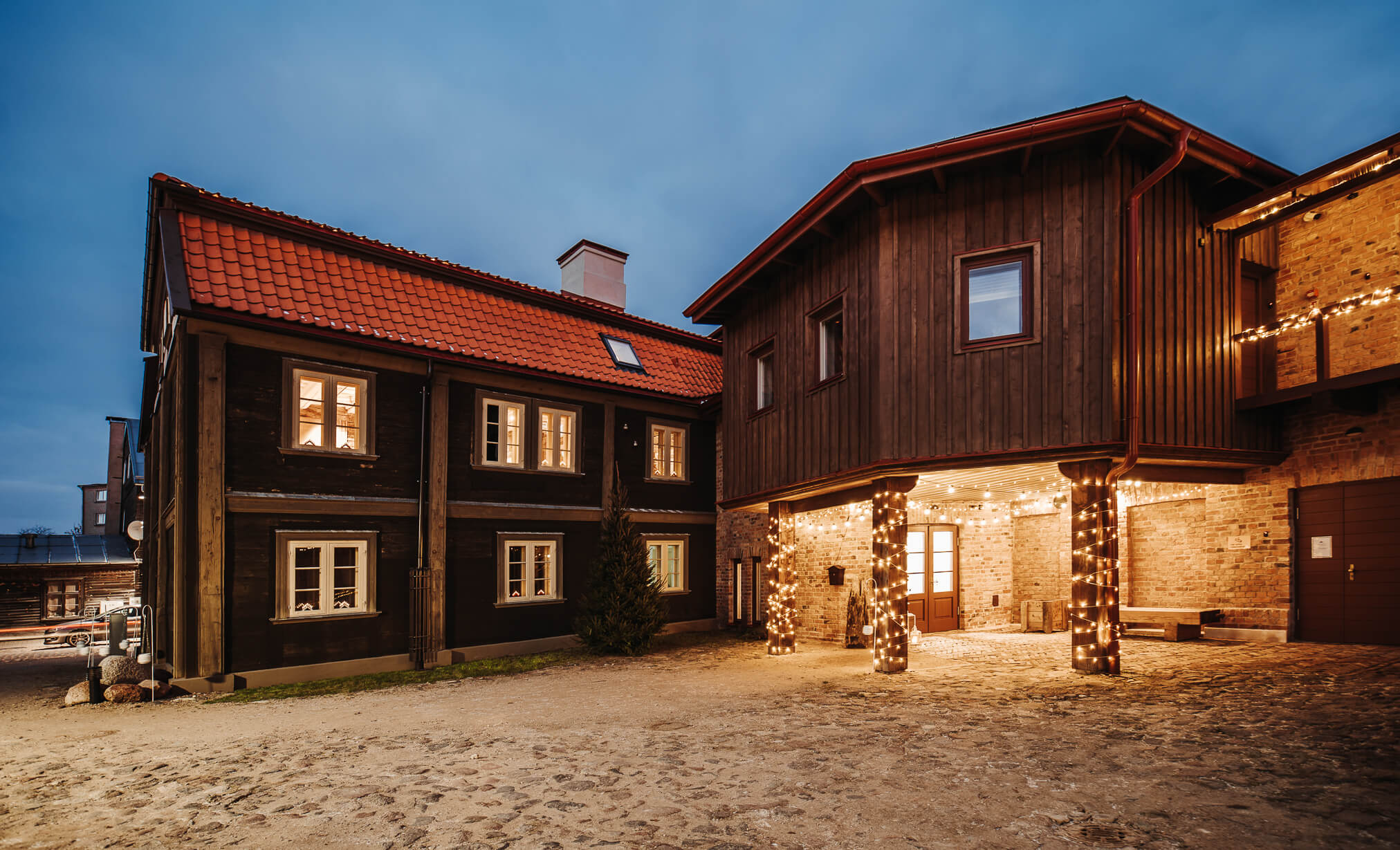 prev
next
View the embedded image gallery online at:
https://www.visit.jelgava.lv/ee/huvivaeaersused/muzeji-un-ekspozicijas/item/4901-jelgavas-vecpilsetas-maja#sigProId828389fc5d

Jelgava has been the largest and most important city in the cultural and ethnographic region of Zemgale since the 15th century. 2. In the summer of 1944, the town was practically destroyed as a result of World War II. Jelgava’s Old Town Street block was formed between the 18th and 19th centuries and is the oldest part of Jelgava’s urban development with wooden buildings that were not destroyed during the war. The block has preserved its unique historic street network and density pattern, as well as the architectural, artistic and historical expressiveness of its wooden buildings.

Jelgava Old Town House is an architectural monument of national importance and one of the oldest wooden houses in Jelgava that has survived to the present day. This house and the adjacent building of the Zemgale Restoration Centre, as well as their land were located near the 17th century city ramparts and the historic Jacob’s Canal.

Apartments, a shop, a furniture joinery, a bicycle and moped repair workshop, a shoemaker’s workshop and a laundry reception used to be housed in the rooms of Jelgava Old Town House. The ancient inhabitants heated the rooms with stoves and ovens, there was a well in the courtyard and a water main in the street in the 19th/20th century. In the yard there were sheds for firewood and household needs.

By combining the buildings at 50 K. Barona Street and 14 Vecpilsētas Street, a single building has been constructed and renovated, comprising Jelgava Old Town House and the Zemgale Restoration Centre. Jelgava Old Town House features a modern interactive exhibition on the interior and construction trends of the old Jelgava and the history of the house itself. The Zemgale Restoration Centre will be staffed by metal, glass, porcelain, ceramic and textile restorers on a daily basis, and educational events will also be organised to allow interested parties to learn about the restoration process first-hand.

When construction began, the building was in disrepair, resting on rubble and brickwork fragments rather than a monolithic foundation. A complex and unique process for Latvia was used to repair it: the house was raised by about 30 centimetres, new foundations were built, the building was reset, and the original wooden structures were restored. There is evidence that the building has undergone several alterations over time, initially it was smaller, but later enlarged and raised. In some rooms, the trefoil ceiling, which was typical of wooden buildings in Latvia in the 17th and 19th centuries, has been partially preserved.

To make the Jelgava Old Town House as authentic as possible, the renovation process was carried out using historical technologies – existing and recovered building materials have been used as much as possible in the ceilings, walls and floors. Ancient bricks have been used in the floor renovation. The cellar and the unique attic that were excavated during the construction works have been exposed, while the wall gaps have been filled with moss and flax waste that provided thermal insulation in ancient times.

The courtyard pavement is made of old paving stones that were dug up in the courtyard during the construction of the utilities. The facade of the building has been preserved in its authentic appearance. The lime plaster in the building’s fachwerk is original, only cleaned. The doors are based on drawings of historic doors.

In 2009 the ERDF and Jelgava State City Municipality co-financed project “The Renovation of the Jelgava Old City and Its Adaptation for the Requirements of Tourism” was completed, within the framework of which Old Town Street and the pavement, J. Asara Street in the section from Old Town Street to K. Barona Street, K. Barona Street in the section from J. Asara Street to Old Town Street and street lighting were reconstructed. The restoration of the Jelgava Old Town House and the creation of exhibitions have been implemented within the ERDF project 5.5.1.0/17/I/002 “Preservation and Development of a Significant Cultural and Historical Heritage for Improving the Supply of Cultural Tourism in Zemgale Region”.

In 2020, Jelgava Old Town House was recognised as the best building in the “Restoration” category in the “Best Building of the Year in Latvia 2019” competition and in the “Latvian Construction Award 2019” competition.

The exhibition is set in a historic apartment. Three large gold chests hold the story of the house. By opening the drawers of the chests, visitors can learn facts about Jelgava’s wooden architecture, the Jelgava Old Town House, its history and restoration. The exhibition uses innovative and interactive solutions – videos, animated photographs, audio guides (in Latvian and Russian). Visitors can experience the atmosphere of the house in the past and become part of the exhibition’s bustle by listening to specially composed music and hearing everyday sounds.

The distinctive wooden attic, which has been skilfully restored to preserve the ancient wooden structures as much as possible, is also open to the public. The attic of the house will be used for various thematic exhibitions by artists.

The building has an elevator, which makes it accessible and allows people with limited mobility to view the exhibition.

The Jelgava Old Town House provides the option to rent out a seminar room. The authentic building will add a unique atmosphere to any event. The seminar room is suitable for conferences, meetings, seminars, creative and social events for up to 30 people. The room is equipped with a kitchen, large screen and magnetic whiteboard. The rental fee is EUR 10 per hour.